Remember when you last spoke to a loved one who passed on? Did you realize at the time that it would be the last time?

Life is full of last times. I’m sure there are others but the earliest one I remember is my high school graduation. As we hugged and said goodbye to our friends, we even said that it might be the last time we ever see each other, but at 18 does anyone really take that phrase seriously? So many of my classmates from the Class of 1977 have passed on, and most of them I never saw again after that last time, on graduation day in May of 1977.

What about when you’re raising children and you can hardly wait for them to be able to dress themselves, brush their own teeth, use the bathroom on their own? Suddenly they are doing those things and you don’t remember exactly when the last time was.

My granddaughter used to sit on the edge of my bed and look at the tiny charms on the rag lampshade on the nightstand. I never even took a picture. I used to take my grandson to a place called The Coop, which was a neat and safe indoor play area for little kids, and then I would take him to the play area in the nearby library. I used to rock my smallest granddaughter to sleep. All these things are in the past. I never realized the last time I did them that it was the last time.

The same goes for my husband. He worked as a night zookeeper and would call me in the evening during his lunch break. He would greet me by saying, “Hey, Nutty, whatcha doing?” When was the last time he affectionately called me Nutty? The Alzheimer’s took the affection away. Heck, it took everything away.

There are so many things we used to do together, or things that he used to say, which faded away as Alzheimer’s and Parkinson’s stole him from me. I wish I had known when they were the last times, but maybe that would have been just too sad.

Cherish your moments, the first times, the last times, and all the in-between times. You never know when they’ll never be again.

It’s not fun any more. (Was it ever?)  March began with students and teachers excited about spring break.  Then spring break was extended for two weeks, then three, then four, and now who knows how long it will be before classes resume?  This pandemic has changed everything.
Now teachers are charged with providing online, virtual lessons for their students in the hopes that students will engage and continue the learning they were supposed to do for this school year.  We can only hope that students and parents will be conscientious enough to do it.  I have no doubt that responsible, caring, and concerned parents will see to it that their children tend to their lessons.  As a former teacher and administrator of at-risk students I fear many won’t.
Many of my students were in the programs I ran because they did not have supportive homes.  Many parents were too busy with their own lives to be involved with the lives of their children.  Some didn’t even care if their children attended school or not.
Students of low socioeconomic status may not even have access to the internet.  Their parents may be unable to afford internet service or even computers.  Students in rural areas may not have access to reliable internet service.  With libraries and coffee shops closed, what do these students do?
Will administrators keep students back who were unable to do the lessons?  Will they be able to discern who couldn’t and who just didn’t want to?  These are questions that will certainly have to be addressed.  I’m glad I don’t have to make those decisions.  I’m glad my children are grown and that their children are too young to be in school right now.
My heart goes out to parents and school personnel.  I pray for the kids, the parents, and the educators, those who are seeking an education and those who are trying to provide education.  I pray God will bring us through this pandemic stronger and braver and more compassionate than we were, and that we will learn the lessons no textbook or computer could ever teach us–love for others.
Stay safe and well, my friends.
XOXO
I thought I was finished decorating for Valentine’s Day.  I mean, the kids are grown now, so I can’t say I’m doing it for them.  But my plain flat coffee table was bothering me.  With nothing to adorn it except an old vintage tapestry, it was becoming a dumping ground for newspapers and magazines and stuff.
Not good.
This tapestry I found at a barn sale is a mini version of the one my grandmother Mary Lillian Nunn had hanging over her couch as long as I can remember.  (She is the namesake for Mary Lillian Vintage.)

I had a vintage typewriter sitting on an antique school desk that seemed lost there.  Unnoticed.  So I brought it out.

Cute, but it needed something.  A sprig of something.  So I looked around.  I found nothing in Hobby Lobby, and then something Valentine-y caught my eye in Walmart, and it was only 97 cents! I tied a piece of twine around it and set it on top.

Nice, but it still needed something.  I had some old Bingo cards and red hearts lying around.  I wondered if they would work.

Perfect!  Well, until I found a box of Victorian Valentines from a garage sale that I had forgotten about.

Now it was perfect.  Another Valentine vignette.  It doesn’t matter if no one but hubby and the dogs see it.  It’s pretty, and it makes me happy. 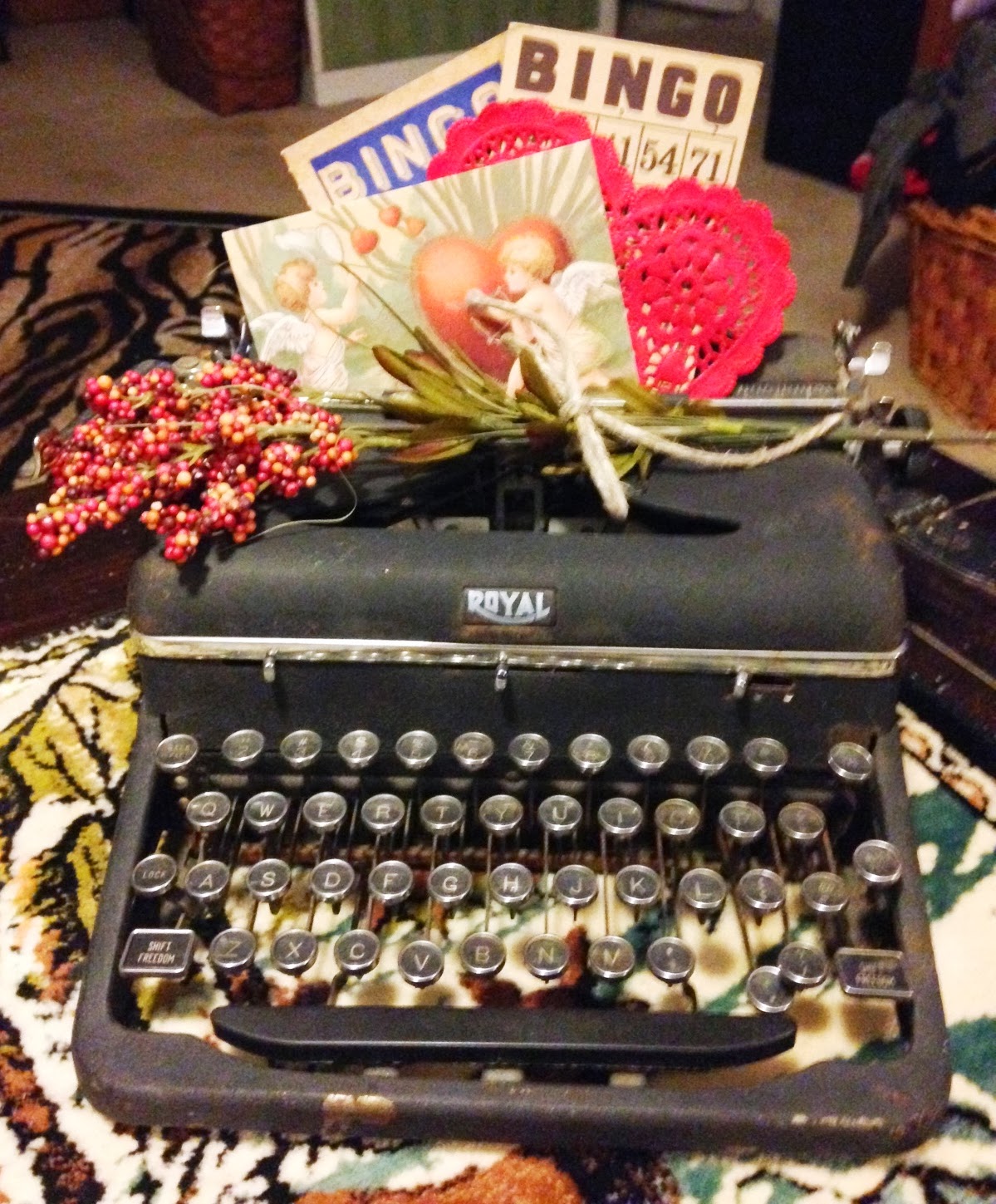 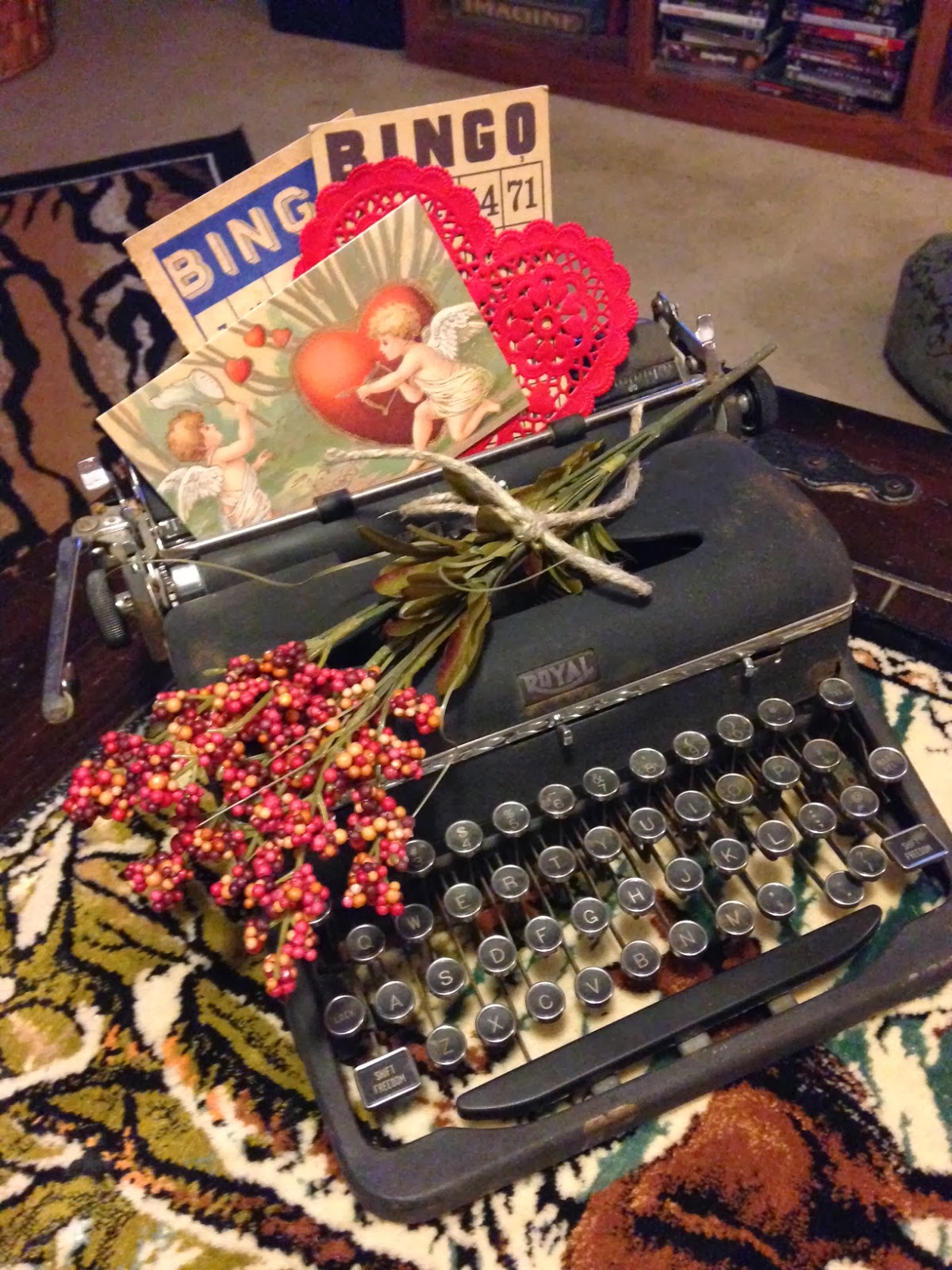 I think I’m finished with Valentine decorating.  What about you?
March is around the corner and I’ll soon be looking for leprechauns and clovers.
Happy Valentine’s Day!
XOXO
From my booth A.C. Junk ‘n’ Stuff, a few Valentine wishes are sent your way.  This little postman pup hit Bingo when he delivered the best Valentine ever. . .

The pup below sings along as his master serenades his favorite Valentine. 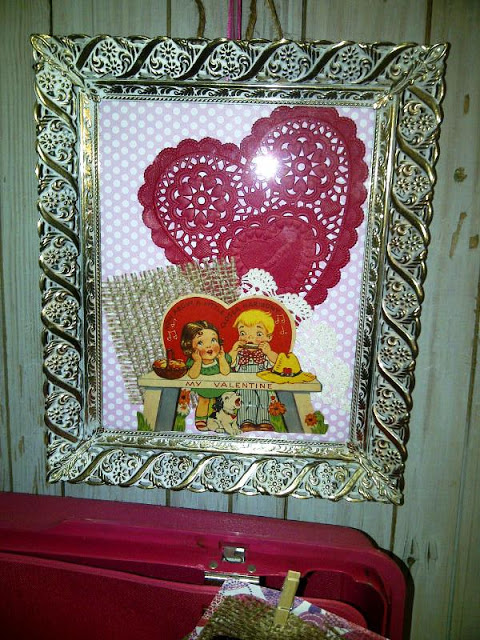 Here is a close-up of the banner hanging in a vintage pink suitcase.  I mean, really, I bet that pink luggage set was so fashionable back in the day.

This vintage girl is talking on the phone to her Valentine as she reclines against a piece of crocheted lace and striped paper.  Love her fat little pink cheeks! 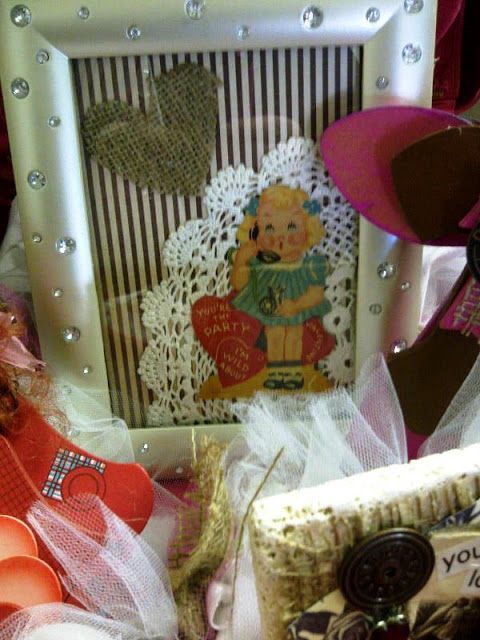 I couldn’t finish a Valentine’s Day post without sharing what my sweet hubby brought home to me the other night along with a mushy card.  Aren’t they just beautiful?

Even more beautiful in an ironstone pitcher! 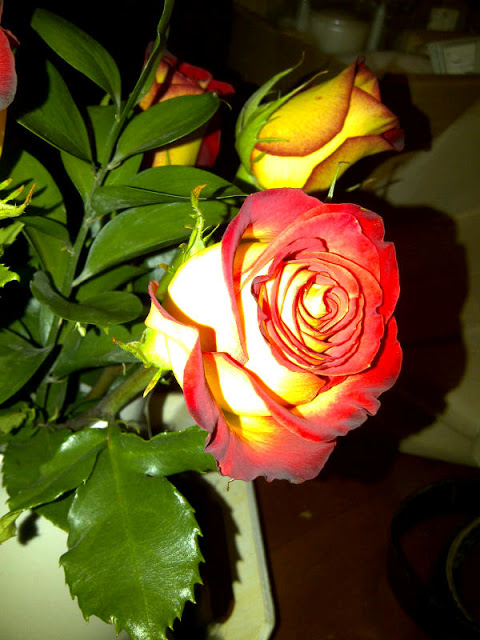 Exquisite.  Just like I hope your Valentine’s Day has been.  Celebrate the love in your life, even if it walks on four legs or makes its own food with sunlight and chlorophyl.  Happy February 14th, everyone!
XOXO
I heard in the news this week about a man who lost his beloved wife of 60 years and now refuses to sleep in the bed they shared.  The reporter said that the man had always been “madly in love” with his wife.  He couldn’t bear sleeping alone in the bed he had shared with his wife for 60 years.

And then I found this story:


“CLARKS SUMMIT — Here’s an example that even in times of grief, you can find some inspiration and hope.
In this case, a family in Lackawanna County lost a mother and father within hours of each other.
The couple’s amazing love story now provides some comfort during a very difficult time.
After 60 years of life together, death only kept Daniel and Virginia Fogarty of Clarks Summit apart for three hours.
The one-time high school sweethearts, the husband and wife of 57 years died the same day last week, only hours apart.
We talked with four of the Fogarty’s five children. They are coping with such a sudden loss by clinging to quite a love story.
Virginia had been sick, but Daniel’s illness was sudden and both ended up in the hospital the same day. They died a few days later.
Virginia died first. When the family told Daniel, he made the decision to refuse any more medical care.  With his children around him, he died 25 minutes later.
The couple certainly left a legacy. Five kids, eight grandchildren, and one great-grandchild. A family that will always be inspired by the love of mom and dad, grandma and grandpa.
And the family says it’s a love story that continues above.”
(http://wnep.com/2012/12/11/a-lifetime-of-love/)
In this story, the man couldn’t bear this life
without his beloved wife, so he chose to join
her in the next life.
And then there are my parents, who will be celebrating their 55th wedding anniversary this coming June!    They were only kids, ages 16 and 17, when they married in 1958, and within eight years they had a brood of four children, and yet they are still together and happy after all these years.  How can this be?
I have my theory.  It’s called commitment and holding true to your promises.  These people took their marriage vows seriously.  My parents took their roles as parents seriously.  They all recognized a higher purpose for staying in their relationship beyond their own immediate gratification. They considered the lives they impacted, the lives they were responsible for, and the futures they were entrusted.  On the other side of parenting, grandparenting, and careers, they found they still had each other and that the marriage bond had grown stronger.
What a legacy to leave to your own children and grandchildren!  This kind of marriage commitment is rare today but not impossible.  The real meaning of marital bliss may indeed be the reward two people find when they realize that 60 years have gone by and they are still just as much in love as they were the day they began.
Many times relationships end.  Sometimes it is messy.  Sometimes they are short-lived.  Sometimes it isn’t your fault.  Sometimes it is.  But wouldn’t it be wonderful to find that person you could be with for the rest of your life, and say with the poet Robert Browning:  “Grow old along with me!  The best is yet to be. . .”
Indeed something to strive for.
Happy Valentine’s Day, my friends!
XOXO