Skip to the content
It’s raining!  It seems like forever since it has just rained and rained without storms, high winds, damage.  My former student Doc Deason, who is now a weather forecaster for a local television station, came in to the flag shop this week.  It was good to see him, but naturally I had to mention that he needed to get us some rain.  I bet weathermen and women love that, don’t you?  He promised it was coming.  And boy, did it ever.
I had to go to the post office today so hubby and I ventured out into the rain.  It was our lucky day because we spotted an estate sale on the way.  I love junking when it’s raining.  I don’t know why.  There’s just something about it.  And this estate sale was a good man’s sale.  Hubs came home with some treasures and I didn’t buy anything! 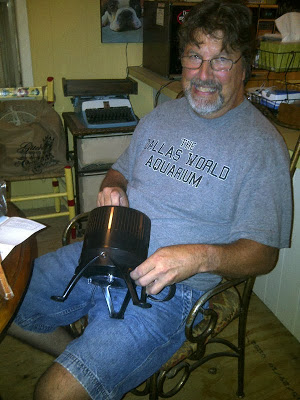 Jimmy posing for the camera with part of his new-to-him game feeder motor.

The Moultrie deer feeder was a good deal.
Or so he said.

This is the part that holds the corn!
Deer supposedly love corn.  Apparently, cows and feral hogs do, too.  And raccoons, because they chewed right through the feeder you see in the background.

He also found a heavy metal jigsaw.  Everything was 25% off!
.

Five and one half inches in less than 24 hours.  We certainly needed it.  And I won’t complain, even though the Scamp camper leaked and I am having to wash linens and run a fan on the carpet to dry it out.  Hubby has a plan to fix that, though.  And I believe he will!
What do you like to do on a rainy day?
XOXO