Skip to the content
They say when you stop dreaming you stop living.  I can’t imagine not having a dream, not having some kind of goal ahead of me.  God help me if I get to the point where I can’t dream.  This past week I realized two long-held dreams of mine, or maybe even more!
Dream 1:  My daughter Natalie and I hooked up my 1978 Scamp trailer and headed down to Round Top, a 240-mile drive from our home in East Texas.  I made a trial run with the hubster about a month ago to see if I could drive it and hook up the trailer okay.  Here is that post.
We camped at the same campground, Oak Thicket Park on Lake Fayette, where I was successful at backing in the trailer and unhooking it, but it wasn’t without much anxiety!  (Check later for more on that!)
But first, I have to share what happened on the way down.  We were about 60 miles from home when we ran into a rainstorm, which is not good since Annie leaks a bit around her top vent and also through the window a/c unit.  During our five-inch deluge a few weeks ago, she got quite soaked inside!
We were entering the small city of Buffalo, Texas and had encountered a few sprinkles here and there, but now I saw that we were heading straight into a wall of rain!  Frantically I looked around and spotted an abandoned gas station which still had the roof over where the gas pumps used to be.  I pulled Annie under the roof where we waited for about twenty minutes for the rain to stop.
The wait gave me a chance to check her out to make sure we hadn’t lost anything and that her tires and the trailer hitch were still okay.
I never realized what one has to pay attention to when hauling a trailer, even as tiny as the Scamp is!
Here is Natalie waiting for the rain to clear.

She is much better at waiting than she was a few years ago!  Notice the grass sprouting from where the gas pumps used to be. 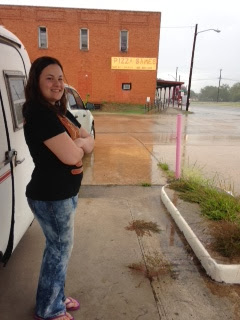 Across the street is Davis Country Store, a cool western and tack store hubby and I visited during our last trip.

As soon as the rain let up, we headed to a nearby Dairy Queen where Natalie enjoyed a meal of chicken strips and I had a taco salad.  I couldn’t resist taking a photo of that cute camper waiting for us outside in the parking lot!

We arrived at our destination only six and one half hours later, an hour and a half longer than Google maps predicted, but Annie only moves at 55-60 miles per hour.
Stay tuned for more about our Texas Antiques Week (Dream 2) Scampventure!
XOXO