Skip to the content
It’s deer season and I hadn’t been hunting yet.  Opening day had come and gone, and I hadn’t been to the deer blind once.  Not even during archery season.
My elbow has been bothering me for over a year now, and my doctor just chalks it up to getting older.  #timetofindanewdoc?
It has been tough to pull my bowstring back, not to mention climbing up into the stand.
Plus, it hasn’t been cool enough to keep the mosquitos away, so I haven’t been interested.
But November 4 heralded the beginning of rifle season in my neck of the woods.  I had to work that day, so I didn’t get to go.
But soon the temperatures finally dropped and I got some time off.  The stars all lined up the other morning, so I donned my duds, gathered my gear, and traipsed into the woods after my hubby an hour before dawn.
We were getting settled into our huntin’ chairs and trying to be quiet when suddenly Hubby said, “Oh, s***.”  I followed his gaze to the place illuminated by his cap light, behind and over our heads where a cluster of red wasps sat humming, their black wings folded flat against their fire red bodies, unable to move because of the cold.
To quote Roseanne Rosannadanna: “I thought I was gonna die.”
They were indeed humming, quivering as if intent on attacking but frozen and unable to carry through.  I was out of that little wooden modified shed blind faster than we could say, “You fumigated this place, didn’t you?”  and answer, “Yes, with three bug bombs!”  WTH?
Then I remembered my backpack was on the floor wide open!  I imagined angry wasps dropping into it and getting acquainted quite painfully the next time I reached inside for my binoculars or a snack.

“Get my backpack!” I hissed/whispered/shouted at Hubby.  I cared not if the biggest buck in ten counties was in earshot.  “And my gun!  And my coffee!”
Don’t forget the coffee.  I was barely awake.  Well, I had been barely awake until I saw wasps.
Now I was wide awake.
My husband, hero that he is, just happened to have a can of wasp spray in the blind, which he put to good use, dropping those suckers like flies, which he then proceeded to stomp and sweep out the door.  It was safe to re-enter in just a few minutes, which I did, ruffled feathers, spine chills, and all.
He saved the day before the sun came up.
We were back in our places in no time, confident that Big Billy Buck would wander into view soon after daylight.
Well. . .

Stay tuned for the rest.
XOXO 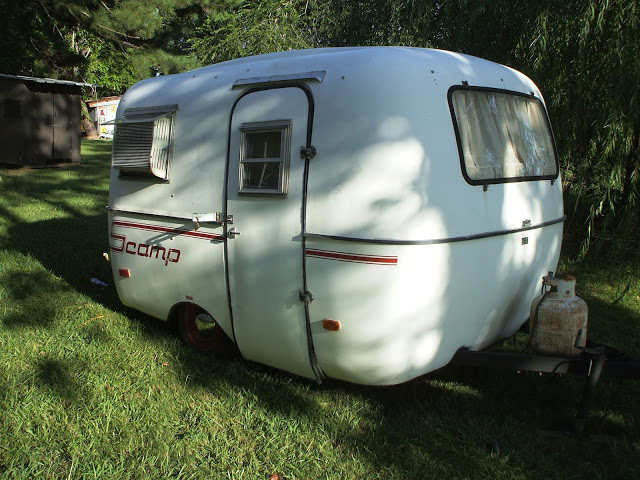 Remember this little guy (gal)?  I posted about over a year ago?  Or was it two years?  My husband and I fully intended to restore this little doll and use her at our deer hunting site.  (I can’t call it a deer lease because we don’t actually lease the land. . .it belongs to my brother and sister-in-law.)  She got put on the back burner after I got a teaching job 70 miles from home and had neither the time nor energy to devote to her. So she sat there, all forlorn and mildewy, until last week when I started working on her again!  (God bless retirement!)
We had already replaced the little air conditioner, pulled up the carpet and started putting a new piece down, removed the seat cushions and compartment doors, and scrubbed the walls and ceiling down.  However, sitting neglected for that long just invited more mildew, so it’s back to square one.
Last week I finished painting the inside of the closet, and today I painted part of the rear ceiling and wall, using Behr Premium Plus Ultra flat latex paint in Pale Sagebrush.  I used a paint sample left over from painting our house, so I ran out quickly.  I’ll have to make another trip to Home Depot before I can continue painting.  Sponge brushes work well but wear out very quickly, so I switched to a cheap two-inch paintbrush.
Nothing gets your pumper pumping like glancing down while you’re painting to see a red wasp about eight inches away, walking up the wall towards you.  For those of you unfamiliar, these wasps are as angry as their color and pack a very painful stinger!  Thank goodness he was wobbly because of the cooler weather.  He wore a wet coat of paint to his funeral, but no hymns were sung!  Just one big hallelujah!
I’ll keep you posted on the progress of my little 1978 Scamp camper.  Now that I know what kind of paint application works, I can finish that up, finish the flooring, and get the cushions back in!  I can’t wait!  I’m ready to take her on the road!
Stay tuned!
XOXO

No more hunting for wedding stuff, that is!  Ha!  Had you going, didn’t I?  Actually, hubby and I did sit in our deer blind for four hours this morning but got nothing but a sore back and lack of sleep.  Those deer just are not cooperating so far this year! But no matter.  That gives me opportunity to show you one of the results of my hunt for cheap wedding decor items.

Remember this photo from October?

I had begun spray painting a piece of an old dresser or vanity, the part that holds the mirror.  At $4.99 it was a steal at Goodwill, and I envisioned it as a vintage-looking chalkboard welcome sign for the wedding.  I think it turned out pretty well, don’t you?

More ivory spray paint, a couple of layers of chalkboard paint, and a welcome message in chalk, and it made a perfect welcome to the wedding.  I tucked it under the low-hanging branches of a pine tree and anchored the base in a small galvanized bucket.  So easy, so cheap, so vintage.
Here is another little vignette I made for the hors d’oeuvres table from an antique clock lamp, some vintage cake toppers, a framed photo, and an old book.  I also added a milk glass compote dish, a wire votive holder with crystals, and a few steampunk gears and keys.  A vintage wedding cake topper perches on the top of the lamp base, which has the time of the wedding on the clock:  3:00.  The green lamp I spray painted black.

I skipped blogging last night in favor of going to bed early after an all-day last minute wedding shopping day, so I will do my best to combine the two today!  If you don’t mind. . .or if you do. . .

A couple of days ago hubby and I grabbed our hunting rifles and headed to the shooting range to sight them in.  I am READY.  My first and only two shots with my little Walmart Remington 243 were smack dab in the middle of the bull’s eye.  Now if I can just hold steady if I get the chance to get a deer or hog in my sights!

Hubby, on the other hand, had to sight in both his Remington 12 gauge slug gun and Remington 760 Game Master 30-06.  That took a little while, but we are both ready now.  Rifle season starts THIS Saturday!

Today on the last day to hunt does during archery season I actually saw a large buck but it ambled off before I had a chance to make sure its antlers were legal.  I learned that I should have done a “grunt” to make him stop.  Maybe he will amble back so I can introduce him to my 243.  He was about 50 yards away anyway, a tough shot for an inexperienced bow hunter like myself!

Here is a shot from my stand in our hunting area, a mere few acres belonging to my brother and sister-in-law but RICH with wildlife. It was so beautiful this morning with the still almost full moon shining like a headlight and then the leaves falling after daylight when a breeze stirred the trees.

Hubby and I stayed in our stands for a good 4 1/2 hours, which is my bladder’s limit, before grabbing some lunch, changing clothes and heading out to Canton for First Monday Trade Days.  I just HAD to visit my fave shop, Girls Gone Junkin’!  I got a cute little heart-shaped steampunk pendant to wear with my wedding outfit next weekend and a darling little wedding cake topper with bride and groom dolls whose eyes move!  For some reason I have started collecting vintage cake toppers.  They are just too adorable!  Why am I collecting again while trying to declutter?  I’m hopeless, I suppose. . .

And then there was this sight:  Have you ever seen so many cow skulls?  Kind of creepy. . . 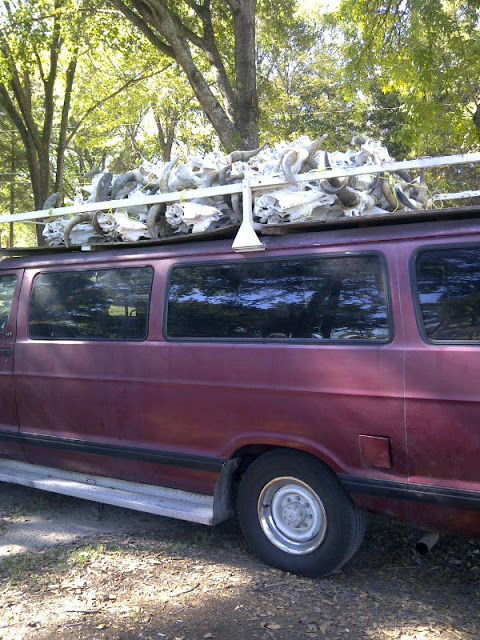 It was a long, hot day (yes, in NOVEMBER!) but it was a fun day.  Maybe November will soon realize it isn’t September and turn cooler!  How about a little cooler next Saturday?  But no rain, please!  I’m not picky, huh?  Happy junkin’ and huntin’, everybody!

It’s finally archery season.  Hunters have been waiting for this time of the year.  They have set up their deer stands and blinds, planted and reaped tempting corn and oat crops, set up and filled feeders, bought or repaired their bows, practiced shooting targets, and bought their hunting licenses.  They, like my husband Jimmy and me, are ready.  Nothing can stop us now.  Or can it?

You’re sitting in your deer stand, and have been there for two hours waiting for daylight.  For all you non-hunters out there, you have to get to your stand early so you won’t scare the deer away when it gets light enough to see them.  As dawn dawns, you begin to be able to see what’s out there.  And what’s out there begins to see you, and find you, and BITE you!

It’s those pesky mosquitoes, the scourge of many a hunter.  Fortunately, there is a weapon out there for the war against mosquitoes.  Actually, there are two that my husband and I use and would highly recommend to anyone fighting the swarm.

Jimmy uses a Thermacell.  Well, he did before he lost his this week.  Luckily, our local Walmart carries them so we will be able to pick up another one for under $25.  These little units emit a warm repellent which keeps bugs away, and they are portable, with a holster and refills available.

As for me, the cheapskate and not yet a “real” archer with a bow kill under my belt, I use the less expensive but in my opinion just as effective Off! Clip-On.  It retails for less than $9 and also has refills available.

Yes, we could spray ourselves down with Off! mosquito repellent on top of our DEET and Permethrin insect repellents.  We have to protect ourselves against ticks and chiggers as well.  But these two devices have cut down on the layers of insecticide we have to put on our clothes and skin and keep us from becoming mosquito breakfast.  Yay for modern technology!  Now I don’t have to swat at bugs while trying to be still in my stand!